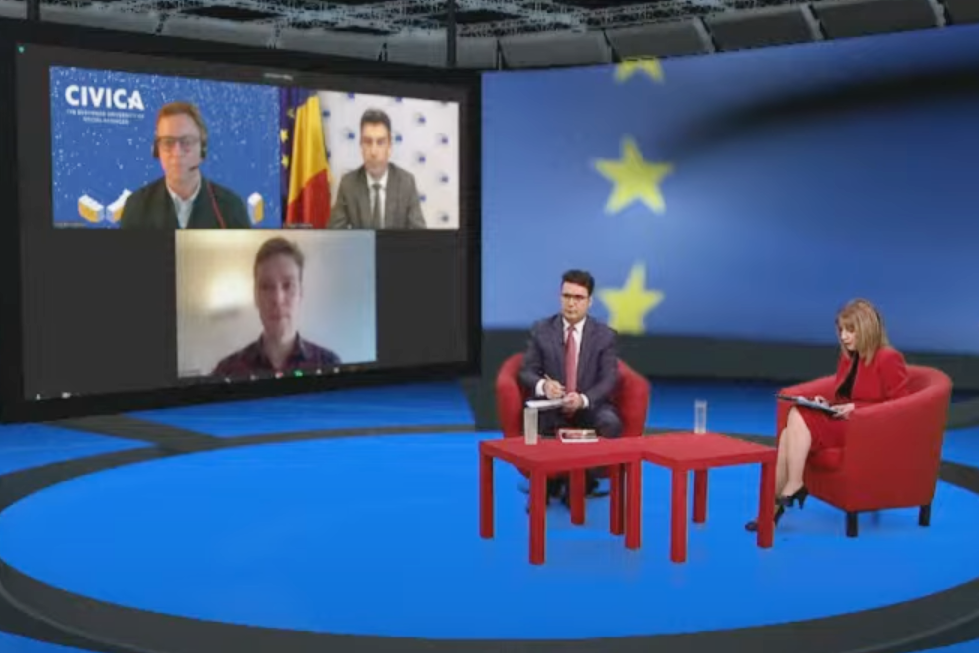 CIVICA representatives weigh in on Europe of tomorrow

Education, migration, climate change and digital transformation are among the key issues of the Conference on the Future of Europe. On 10 December, CIVICA representatives Aurélien Krejbich (Executive Director), Remus Pricopie (Rector SNSPA Romania) and Emil Schenkyr (exchange master's student, Sciences Po), as well as MEP Dragoș Tudorache discussed these topics in the live panel "Observers to the European Parliament."

The show is part of a new series broadcast by the Romanian national television with support from the European Parliament and dedicated to the Conference.

Reflecting on the future of education, Krejbich highlighted the role of the European Universities in the transformation of Europe. He offered examples from CIVICA's innovative activities in education, research and civic engagement implemented in the current pilot phase.

As Rector of a university in the CIVICA alliance, Pricopie stressed the benefits of participating in a large European network that pools resources and expertise from established higher education institutions.

Emil Schenkyr, a Sciences Po master's student who was enrolled in the CIVICA multicampus course this semester, shared his experience of working with students from all over Europe, which he found enriching both academically and personally.

From a policymaking perspective, MEP Dragoș Tudorache argued that the European University alliances have a crucial role in strengthening Europe's competitiveness and building bridges between academia and policymakers. Tudorache is the Vice-Chair of Renew Europe Group and the Chair of the Special Committee on Artificial Intelligence in a Digital Age.

Watch the full discussion below.

Observers to the EP: Europe of Tomorrow: education, migration, climate change and digitalization