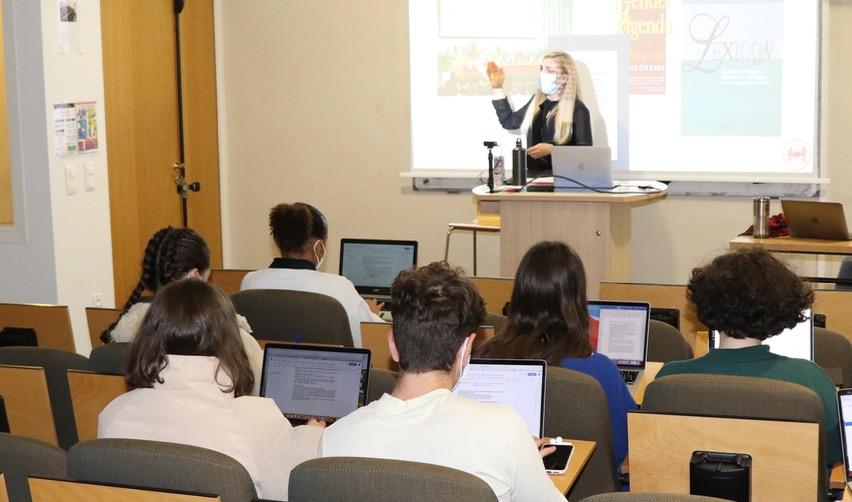 “An indelible mark on my student experience”: Spotlight on the CIVICA Engage course

In Sciences Po’s Engage course, students participate in an innovative independent project that uses field experience as a pedagogical tool.

Throughout the fall semester (2021-2022), Alexandra Ana, a Sciences Po Teaching Fellow at the Sciences Po’s Reims campus, supervised the work of a group of students who either participated in the CIVICA European Week or took Engage courses during their fifth and sixth semesters at Sciences Po.

These experiences culminated in the Showcase Assignment—an independent project on financial literacy. As the director of these student projects, Alexandra Ana worked to help students focus their work and encouraged them to ask relevant questions on the subject of financial literacy: “It was gratifying to accompany the students in the process of articulating on the one hand the intellectual, more theoretical, conceptual dimension of the key public issue they addressed and on the other hand its practical implications.”

The Engage course functions in conjunction with Sciences Po’s founding principles of humanism and its goal of forming ethically minded citizens who are active in both their local and global communities. The course is taught within the context of Sciences Po’s Civic Learning Programme, which encourages the understanding of citizenship issues through a “learn by doing” approach and allows students to work on a project of their choice that engages in a meaningful way with a social or civic issue.

For Sciences Po student Marco Gerbino, the link between Sciences Po’s Civic Learning Programme and CIVICA’s Engage course was a driving force between his choice to take the class. As he says, when presented with the opportunity to take the CIVICA Engage course, he “didn’t think about it twice.” According to him, this enthusiasm stemmed from his previous experiences with civic engagement: “The Showcase Assignment gave me the opportunity to explore the topic more in depth as well as link it with the themes of my civic engagement experience at Sciences Po.”

Linking the local with a larger European perspective

In the case of Sciences Po student Héloïse Nonat, her Showcase Assignment took the form of a magazine designed to teach young people about the concept of financial literacy. As she notes, “I liked how open the class was, in the sense that we could choose our topic quite freely. It was also nice to link our Civic Learning Programme topic to this project, and to be able to use any format we'd like, such as making a podcast, an essay, conducting interviews, creating a video, or a magazine.”

Indeed, this freedom in approach was an intentional pedagogical choice, allowing students to build upon their strengths or interests to cover a given topic—in this case, financial literacy—from an unexpected angle; “told slant,” in the words of Emily Dickinson.

Héloïse Nonat’s innovative approach took the form of a magazine that incorporated articles on financial education in the European Union, cryptocurrencies, and Generation Z, while showcasing the experiences of several young Europeans and their relationships to financial education. As Professor Alexandra Ana notes, “I encouraged Héloïse to articulate her knowledge and passion for photography put in practice during her civic engagement with the societal issue of financial literacy.”

The Engage course comes as the logical continuation of the European Week, a CIVICA event organized in the context of the CIVICA Engage Track that brings together students from the four participating universities: Bocconi University (Italy), Sciences Po (France), Stockholm School of Economics (Sweden), and The London School of Economics and Political Science (UK).

The collaboration and exchange between students from these campuses proved to be a central aspect of the experience, allowing students to develop their ideas and perspectives communally while working with multiple cultural and political backgrounds. As Sciences Po student Léa Fournier noted, “The groups we worked in were constituted by one student from each university, therefore we all had very different backgrounds; some of us were more familiar with economics while others were more comfortable with international relations.” This intermingling of specialties and universities allowed her to bring together “new ideas inspired by different practices in our own countries and to combine them to bring a new approach to our project.”

Student Marco Gerbino was also won over by the international aspect of the course, alluding to the ways in which it has enriched his Showcase Assignment, saying that it was “of utmost importance” to his experience. For him, “the idea of bringing together various academic and professional communities from all over Europe to discuss a common theme is something that one does not have the chance to experience daily, especially at the undergraduate level.”

This unconventional format, designed to encourage young people to think about key European issues, uses pedagogic innovation to expose students to cross-cultural perspectives on both the local and international levels. Indeed, by combining Sciences Po’s Civic Learning Programme with the CIVICA Engage Track, students were able to learn about civic engagement on both a local and a larger-scale European level.

As Alexandra Ana puts it, “I believe critically engaging and reflecting transversely across issues, bottom-up and top-down, made students much more aware of the implications and entanglements of different levels of governance and the practical effects of decisions in the policy-making process. It enhanced their confidence in their capacity to act on issues of societal importance from individual and community level to European level, but also their sense of public engagement and responsibility.”

“An indelible mark on my student experience”

What, then, were the takeaways for students from this project? In the words of Marco Gerbino, the course has left “an indelible mark” on his student experience. Indeed, the Engage course, coupled with the European Week and culminating in the Showcase Assignment, goes beyond the confines of a standard university course, allowing for exchange in multiple contexts and between universities and cultures.

As for Sciences Po student Guillaume Marder, he took his experiences of the CIVICA European Week and Sciences Po’s Engage course’s Showcase Assignment to the next level. Since he and a fellow SSE student had enjoyed working together at the European Week, they, as he notes, “decided to stay in touch and started pursuing our own CIVICA student initiative, which aims to analyse the European Monetary Union by using the framework of Optimal Currency Area theory.” For Guillaume, “such a project would have never been possible without the Engage course and CIVICA’s continued support.”

Innovation leads to innovation, passion is contagious, and this collaboration between Sciences Po’s Guillaume Marder and SSE’s Rasmus Salén serves as an example of what can be accomplished when we remain open to new ideas and experiences. Indeed, unconventional pedagogical formats and the inter-European exploration of ideas ultimately plant the seeds for new projects beyond borders, begging the question: what new, innovative ideas are waiting just around the corner to be discovered? 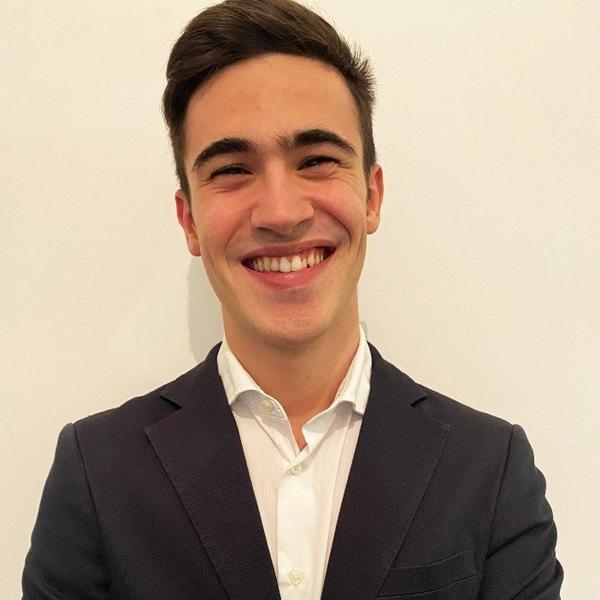 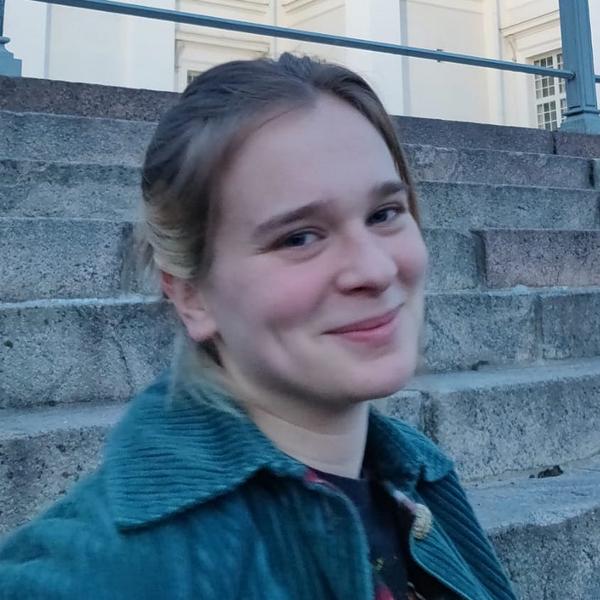 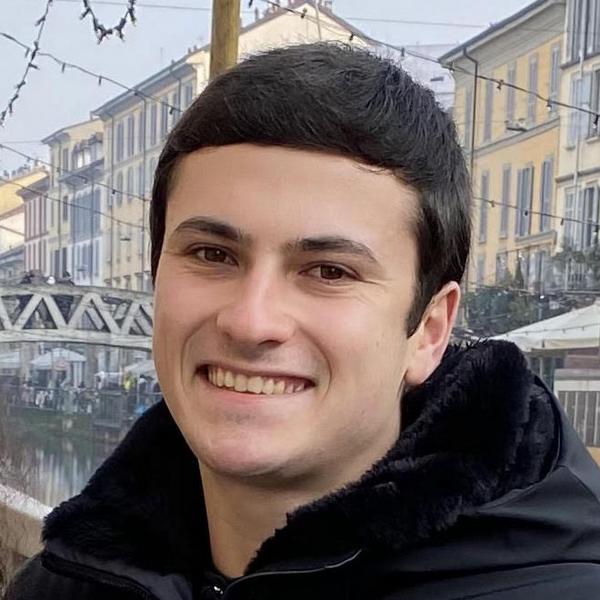