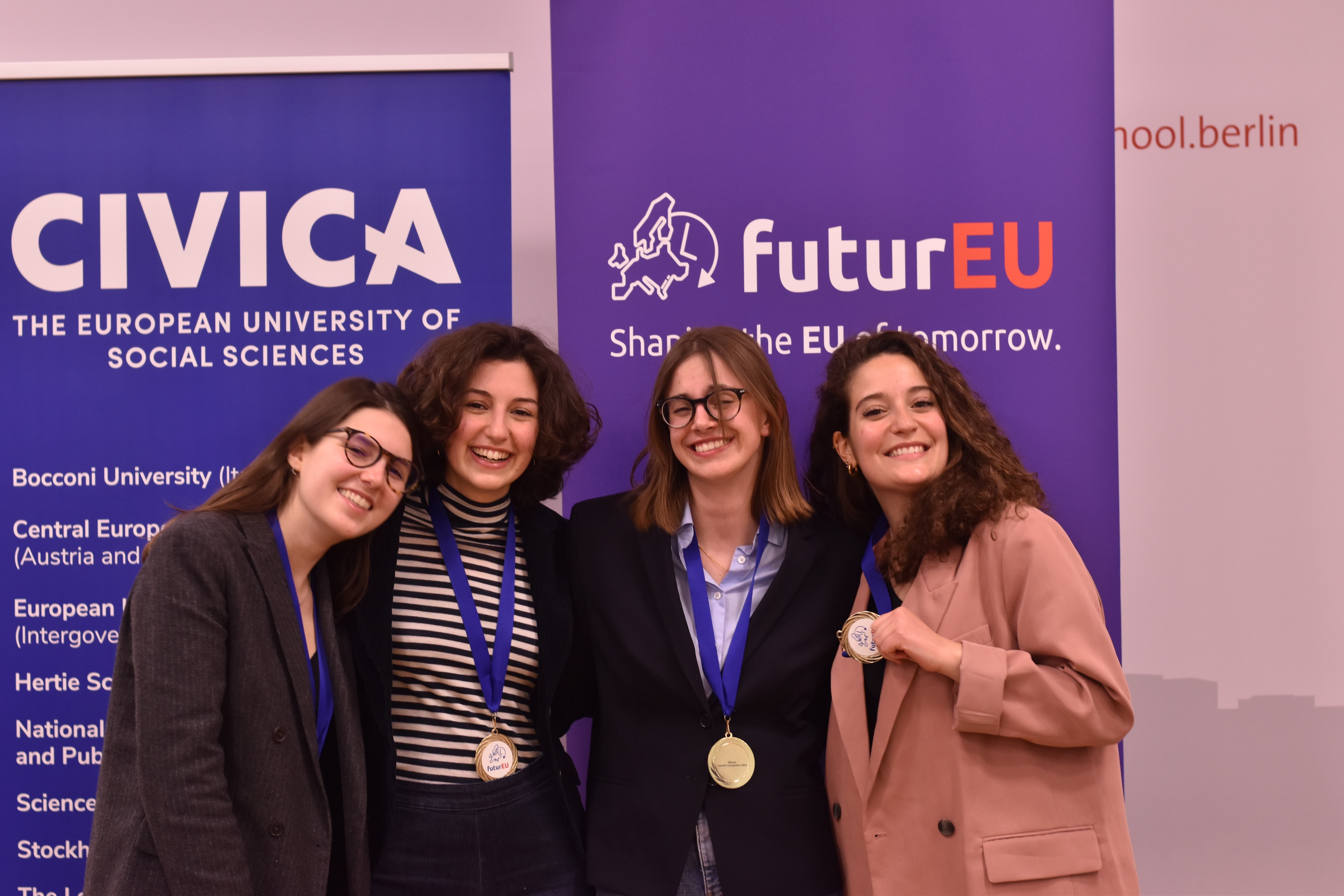 A greater voice for young Europeans in EU matters

Bocconi-Sciences Po team won the futurEU Competition 2022 with a proposal to introduce youth quotas in the European Parliament.

The task was to propose bold and visionary policies to make the EU more appealing and inclusive to the younger generations, and the Bocconi-Sciences Po team came out on top of the futurEU Competition2022. Their proposal? To introduce youth quotas in the European Parliament and give young Europeans more voice in the policymaking process.

The futurEU Initiative was founded in 2019 by master’s students of the Hertie School,with the support of the CIVICA alliance, the Jacques Delors Centre Berlin and Hertie School, with the aim of contributing to shape the EU of tomorrow by involving students in the public debate. The futureEU Competition was open to all CIVICA students and PhD researchers, and it consists of a written round with a submission of a policy brief. 33 teams entered this year’s edition with proposals on the topic "Power to the Future: Visionary Policies for Young Europeans."

The eight best briefs were then selected for the oral round, which saw the teams presenting their proposals in front of a jury of EU experts in Berlin on 8 April. The panel of judges chose as winning proposal that of a team of four students from the Bocconi-Sciences Po Double Degree programme in Public Policy and Politics:Federica Bellato, Benedetta Coraglia, Carolina Guerra and Allegra Semenzato.

We talked to the winning team to hear about their experience:

What pushed you to enter a competition on the future of the EU?

Federica Bellato: Being political science students, all four of us have always felt a strong fascination towards the European Union. We were fortunate enough to be born in the years of the “Erasmus Generation” and take advantage of the benefits that EU institutions have to offer. Not only a competition on the future of the EU seemed like a perfect opportunity to put our policy drafting skills to the test, but we also felt deeply inspired by the motivation behind it. This year’s edition of the futurEU Competition, in fact, called for visionary policy proposals that would make EU institutions more responsive to the needs of future generations. It allowed us to advance practical ideas that could indeed shape the prospects of younger generations of Europeans like us.

Tell us about your choice of topic and proposal you came up with.

Carolina Guerra: Our policy brief was titled “This time I’ve voted, but am I represented?”. Our team advocated for the introduction of youth quotas in the European Parliament in order to tackle the underrepresentation of young Europeans in the policy-making process.

The current demographic change is not only inflicting a greater social security burden on younger generations, but it is further aggravating the gap between youth participation and representation. First, young people constitute an extremely small percentage of European parliamentarians, thus indicating that they are not adequately represented. Second, with the age of the median voter on the rise, the interests of the youngest cohorts of Europeans risk being increasingly side-lined by policymakers. So, in order to prevent future systematic disadvantages, we called on the EU to take immediate actions to address this pressing issue.

What did you get out of this experience?

Benedetta Coraglia: This experience allowed us to appreciate even more the significance of teamwork, especially when having to work under pressure and under a tight deadline. After we were selected as one of the finalist teams, in fact, we had to integrate the feedback received by the panel of judges into our final presentation, just a few hours away. I think we really managed to coordinate ourselves quickly and efficiently, leveraging on each other’s strengths to deliver an updated presentation of our idea.

What was the spirit among the participants?

Allegra Semenzato: The best part of the competition was being able to gather in Berlin with all the participants. It was an enriching occasion to exchange ideas with some of the brightest European students. We were all willing to find proactive and concrete solutions to improve tomorrow's Europe and address the issues that many young people, like us, care about.

Watch a recording of the futurEU final here>>