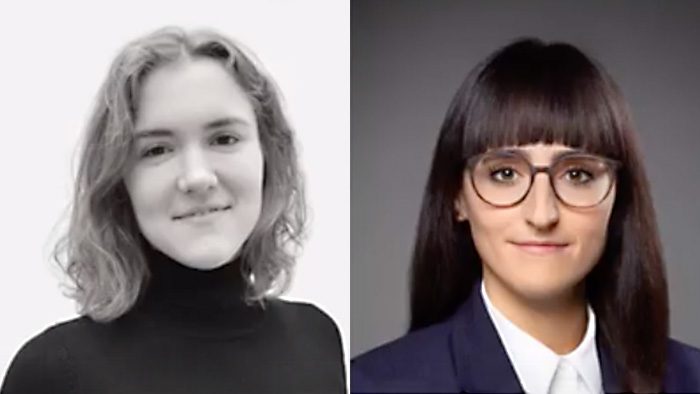 Elena Schulz-Ruhtenberg and Neslihan Altun, who both study Public Policy at Sciences Po and the Hertie School respectively, are the winners of the first ever competition of futurEU, a student-led initiative that aims to contribute to shaping the European Union of tomorrow.

The competition, supported by the Jacques Delors Centre Berlin, the Hertie School and CIVICA - The European University of Social Sciences, took place in several rounds between November 2020 and April 2021. It gave the participants carte blanche to propose one major EU treaty reform. The goal: to “bridge the gap between young people’s voices and opinions on one hand and public discourse and academic research on the other”.

The winning team, among 39 teams made up of 123 bachelor’s, master’s and PhD students from the CIVICA alliance, looked into “How to match EU legislation with local realities” through the Committee of Regions. Their policy brief will be published on the Jacques Delors Centre website. We asked Elena and Neslihan a few questions.

Where did you meet, and why did you decide to compete together?

Elena Schulz-Ruhtenberg and Neslihan Altun: We heard about the competition in the first joint course held under the CIVICA framework in cooperation between the Hertie School in Berlin and Sciences Po in Paris. It was a class on the topic “Democracy in Crisis'', co-taught by Professor Florence Faucher (Sciences Po) and Dr. Christian Freudlsperger (Hertie School).

As part of this course, we worked closely together on a group assignment. Since we had fun collaborating, shared the same interests and also had the same way of working, we immediately decided we would make a good team in the futurEU competition and signed up. Since we both like policy writing, this was the perfect chance to develop our skills in that area and to challenge ourselves outside the framework of university.

Why are you interested in the future of the EU?

Neslihan: Due to my academic and professional background, I am particularly interested in the organisation of the EU institutions and how their inter-institutional collaborations could be improved in the future. It is somehow fascinating how dynamic the administrative procedures are. For me, the institutional adjustments are a continuous learning process and they need to be considered in light of the past, present and future.

Elena: A profound personal connection to the EU was established through my Erasmus exchanges in France and Estonia. Experiencing what this fairly abstract motto “United in Diversity” means in reality was a watershed moment. It turned my academic interest in EU politics into a personal part of my lifestyle and identity. For someone who strongly identifies as a European, thinking of how the EU should function in the future is inseparable from the question of how we want politics to look like in a few years from now, and in what kind of Europe we want to live in. It's nothing abstract, it's about imagining our near future!

Could you explain your winning proposal in a few sentences?

Basically, the idea of our proposal is to better include one of the consultative bodies of the EU, namely the Committee of the Regions (CoR), in the legislative procedure. The Committee of the Regions is the voice of sub-national authorities in Brussels. But we believe its current standing falls far behind its potential as a key actor to match EU policies with local realities.

Concretely, we want to endow the Committee of the Regions with a pioneering option for pro-active political engagement in alliance with the European Parliament. To achieve this, we propose to give the Committee the right to consult the Parliament on taking legislative initiative. These two institutions both represent the citizens of the EU. This makes them perfect allies!

In addition, the Committee is the expert on how decisions made at EU level impact regions and cities. However, this expertise is currently barely considered. That is why the second pillar of our reform proposal aims at including the Committee when the European Commission assesses the impacts of its legislative acts. By this, we aim at making these institutions sparring partners who work together on better law-making.

Why did you choose this topic?

We wanted to surprise the Jury with our proposal on the Committee of the Regions since it is still a widely unknown and heavily underappreciated institution. And it worked!

How did you work and collaborate in setting up and presenting the proposal?

There is a fun fact about us as a team: We have never met in person. Since we got to know each other during the online CIVICA course, we have only exchanged thoughts via video or phone calls. This has worked out perfectly and we really grew together despite these circumstances.

However, taking part in the competition did require lots of overtime hours and perseverance. Especially the preparation for the semi-final and the final was challenging. Convincing a jury of academic experts at the same time with a broader interested public was not an easy task. We had to be extremely concise, yet comprehensible, without losing track of the bigger picture and of what our treaty reform contributes.

What does this victory mean to you?

For us both this victory means an incredible reward for all the intense hours of research, brain-storming and writing. We are grateful that this format gave us the opportunity to be creative and to prove our capability of thinking outside the box. The victory is a motivation for us to continue working on such extracurricular projects because they always open new, unexpected doors. Now, together with the Jacques Delors Centre, we will have the opportunity to further perfect our policy brief. We are very much looking forward to this process!

Do you have one piece of advice for students participating in the next futurEU editions?

Our first advice is that you need to clearly carve out what your proposal brings to the table. Either you offer a fresh perspective on a highly debated issue, or you pick an overlooked issue and make clear why your solution matters to tackle a contemporary challenge.

Secondly, you should incorporate data that supports why the status quo needs to be changed and technical details on how your reform would work in practice. This will show the jury that you have familiarized yourself in depth with the topic and make your proposal stand out!

Last but not least, you should be aware of where your proposal stands between vision and pragmatism, and be able to defend this position. You can further anticipate critique on the shortcomings of your proposal and meet these concerns with a thorough rebuttal in your policy brief.

What are your future plans?

Neslihan: After graduating from my Master’s in Public Policy at the Hertie School in Berlin, I have started working as a Policy Officer in the German Federal Ministry of Labour and Social Affairs. So, in the next two years, my task will be to successfully implement a European Social Fund programme at the federal level, which I co-conceptualised and co-developed last year.

Elena: Since my master’s programme at Sciences Po is very practically oriented, I would like to continue with a second master’s next year which is explicitly research-focused. That will enable me to start a PhD in the field of election studies and voting behaviour afterwards. Apart from that, I don’t have a fixed career plan yet. I believe opportunities will pop up along the road.

Screenshot below: announcement of the winners during the futurEU Final Round