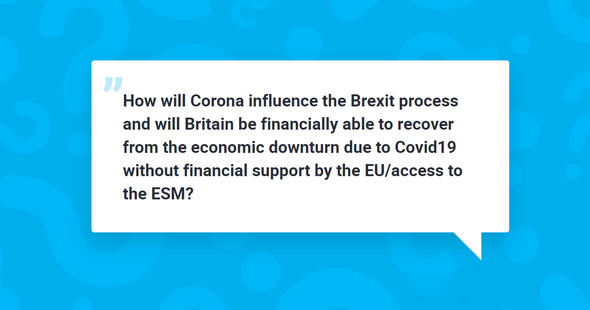 What are possible and desirable scenarios for the future of the European Union? Professor Waltraud Schelkle opens the CIVICA Future of Europe lecture series.

What are possible and desirable scenarios for the future of the European Union? Waltraud Schelkle, Professor of Political Economy at The London School of Economics and Political Science, was the first to answer this question in the new Future of Europe lecture series of the Jacques Delors Centre (Hertie School).

In an online lecture held on 11 May 2020, Professor Schelkle presented her key insights on monetary solidarity in the aftermath of the Corona crisis to over 90 participants. According to her analysis of inter-state risk sharing, solidarity in the euro area is rarely the outcome of collective problem solving, but a by-product of national incentives. Accordingly, Schelkle expects the joint response to the Corona crisis to emerge similarly to the creation of the European Stability Mechanism, which was established as a firewall for the guarantor countries. In this regard, “monetary solidarity will remain tough love” and joint responses will focus on monetary-financial policy. Even though membership in the euro area will help, “the future of Europe will be marked by a long, difficult recovery from the pandemic,” Schelkle concluded.

The presentation was followed by a vivid discussion, moderated by the Director of the Jacques Delors Centre, Markus Jachtenfuchs, Professor of European and Global Governance at the Hertie School. The Q&A focused on the European monetary solidarity in practice and the consequences of the Corona crisis on the Brexit and nationalist tendencies within the EU.

The CIVICA Future of Europe lecture series is financed by the German Academic Exchange Service. The Jacques Delors Centre will organise at least two further lectures in 2020.

Future of Europe: Monetary solidarity in the long recovery from the Corona pandemic