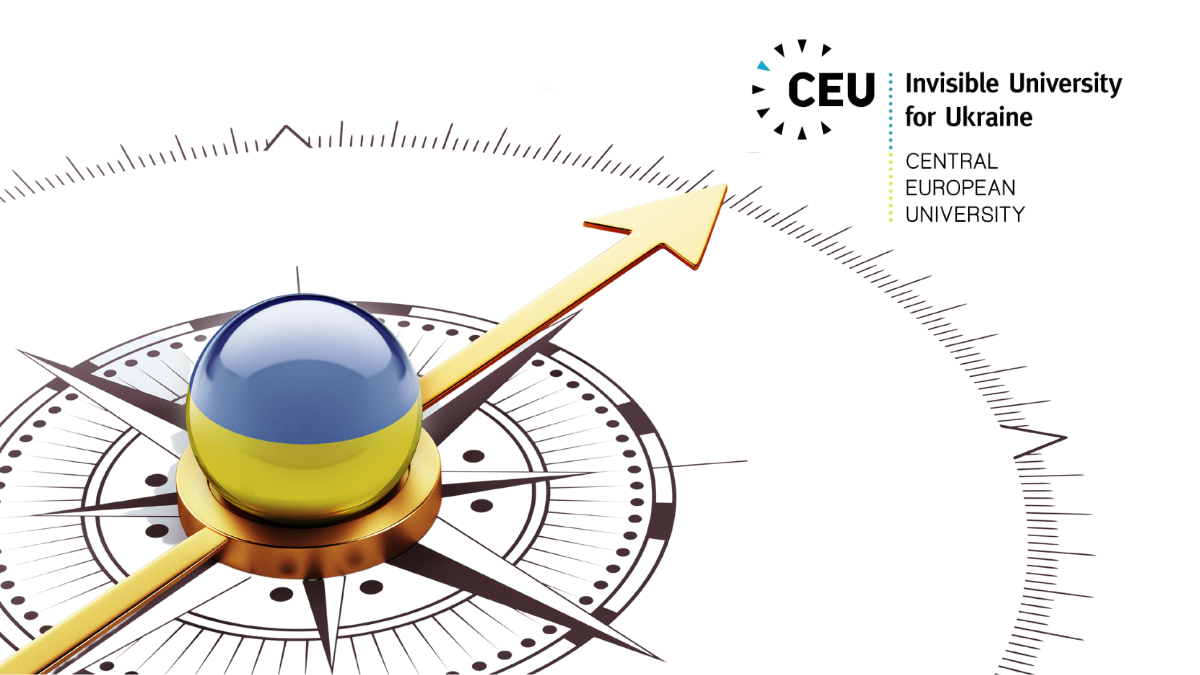 Initiatives for Ukraine around CIVICA: CEU's Invisible University for Ukraine

One of the core initiatives undertaken by CEU communities in support of Ukrainian students during these difficult times is the Invisible University for Ukraine (IUfU).

CEU launched a certificate programme, offering ECTS credits, for junior and senior undergraduate and graduate students from Ukraine, whose studies were affected by the war that broke out in February 2022. This was available to them regardless of the fact whether they were still residing in Ukraine or had fled abroad. Participation in the programme, which kicked off on CEU’s Budapest campus on 20 April, is free of charge and any student who had been pursuing a BA, MA, or doctoral degree programme in a Ukrainian university in the academic year 2021-22 was eligible to join. The language of instruction is English and Ukrainian. The project is financially supported by the Open Society University Network.

The programme offers an intensive learning experience (including lectures and mentoring), placing questions relevant for Ukrainian students into a transnational comparative perspective. It aims at familiarising the students with various cutting-edge interpretative paradigms and methodological traditions in the humanities and social sciences.

“Born out of an intention to help displaced Ukrainian students by creating an inclusive framework of instruction, IUFU was set up in a frantic speed in merely three weeks. We have currently more than 130 students from Ukraine, taught by over 50 instructors, and 30 doctoral students who volunteered to mentor in the programme,”said Professor Balazs Trencsenyi, one of the main organisers of IUFU and Professor in the Department of History at CEU.

Our goal is to prepare students for deeper integration into the world of international academia and broad ongoing discussion on the role of Ukraine in changing European and global contexts. The programme is not meant to replace or duplicate existing online education in Ukrainian universities, but to support them and provide help for filling the voids that temporarily emerged due to the Russian military invasion.

“While many of our students are in very precarious conditions, they are all extremely motivated to pursue their studies and reflect on the current situation with the help of scholarly frameworks of interpretation,” said Balazs.

"I am grateful to my colleagues and PhD students at CEU who responded so quickly and sensitively with this initiative of academic solidarity to the terribly unimaginable situation of Ukrainian students. Our first online meetings with them were very inspiring, as they consider this possibility to study at CEU as important now and for their future. It is also reassuring how many Ukrainian and international prominent scholars immediately agreed to teach at the IUFU," added Ostap Sereda, IUFU Programme Director.

In the words of the students

“When the Russian full-scaled invasion started, I, as well as other people of my age, realised that I was not able to study on a stable basis… I found a project from CEU and decided to apply. In my motivation letter I mentioned that I would like to study conflict studies and human rights… During the war you understand how important it is to know how to write and talk about the war… I am completely satisfied with the programme of the Invisible University. I have attended lectures from the Politics Track, and during the small mentoring sessions, we discussed the questions of the lectures. It was my first programme in English, so I can say that the Invisible University also helped me overcome the language barrier. It gave me huge knowledge in political science and law which I will use in my work.”

“It was a good opportunity for me to listen to lecturers from different fields of study and discuss issues with them. I especially liked that all classes were connected to up-to-date topics and problems. Less attention was paid to theory, and instead we listened to real cases and personal experience of the professors this is what made it very interesting and useful.”

“Firstly, I want to say that this programme helped me distract from everyday problems and the war. It felt like I was back at my home university and back to normal life, but on the other hand, it was much more than the feeling of being back at my home university. The course coordinators, mentors, organizers, and the entire staff were very welcoming and friendly. It's like I had another family. An international family… I would also like to add that the Invisible University, in addition to new information, gave me many other opportunities, such as improving my spoken and academic English, developing my soft skills, and the opportunity to show the first results of my dissertation research.”

“The Invisible University is, perhaps, the best thing that happened to disengage myself from constantly re-reading the news during the war… A favorite memory is the first lecture delivered by Larry Wolff, and when I realised that I was talking to the person who was much admired at my university and whose books I had read many times. This is a very emotional experience because it is far outranks meeting a movie star for example. A historian is a more powerful authority for me, I trusted his words for years, and now I can ask him about the changes in the mind needed to remove the term 'Eastern Europe.' It was a feeling that I am here for a reason, I can study something valuable and worthy and this fact, perhaps, is something that can give me the most strength now.”