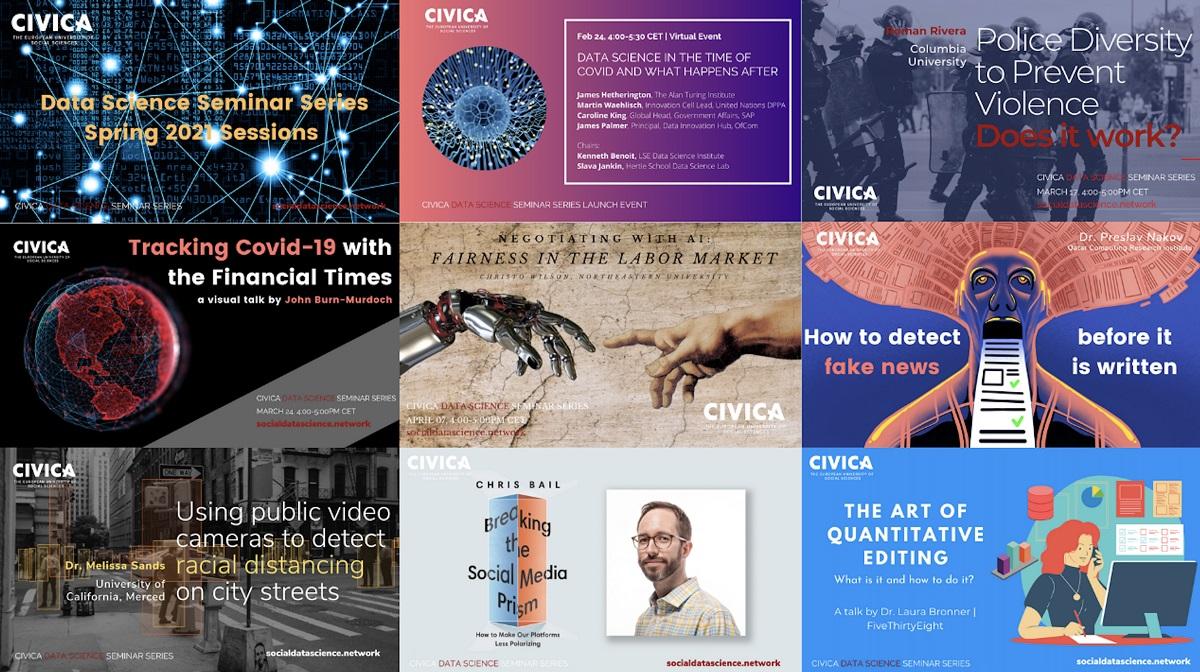 Data scientists look at topics in the current public debate and plan to expand offering in the fall.

“What defines the best data scientist? Well, it’s the person who has the best methods or the best models,” said John Burn-Murdoch, data visualisation journalist at the Financial Times in a recent online talk as part of the CIVICA Data Science Seminar Series. “But I would say it’s also about the person who is the most effective communicator of their work. …Active communication and how you get your results – your findings – across to people in an accessible way that they actually understand is really, really critical.”

Murdoch’s talk on 24 March focused on tracking COVID-19 data and presenting it to the general public. It was part of a series of eight sessions that took place between February and June, organised by the Hertie School Data Science Lab and the London School of Economics Data Science Institute through the CIVICA network – an alliance of eight social science universities across Europe.

Subjects included data science and many topics of current public debate, such as the coronavirus pandemic, police and civilian interactions, labour market equity, fake news and social media polarisation, among others. The seminars were open to the general public and posted on the LSE Data Science Institute’s YouTube channel afterwards.

Erica Thompson, a Senior Policy Fellow at LSE’s Data Science Institute, who works on the ethics of modelling and simulation, says, “The aim was to look at a broad range of topics in social data science, aiming to be quite accessible for different people across the member universities and for a public audience - but looking at quite high-profile, cutting-edge research in data science with social applications.”

The organisers invited speakers from across the CIVICA network, but also from outside. “We try to encourage speakers from other institutions, mainly because we want to have a wider reach of people and not just limit it to the people and researchers we have in place,” says Huy Ngoc Dang, Manager of the Hertie School’s Data Science Lab. “So it's a good chance for people to get to know those at other schools, as well as an opportunity to network and to talk about research opportunities with other institutions.”

The talks proved popular, with 30 to 60 participants in each session, and the partners plan to continue them next year. Dang says they hope to expand the types of offerings from the current lecture series to possible workshops or tutorials. “We're thinking about different other ways to get people interested – so to be more engaging,” he says.

Other CIVICA universities, which also have data institutes, like Sciences Po’s Médialab, CEU’s Department of Network and Data Science, the Bocconi Institute for Data Science and Analytics, and the European University Institute, are also eager to get involved with the next series, planned for the Academic Year 2021-22, says Thompson.

Before that, the Hertie School Data Science Lab and SCRIPTS Data and Methodology Centre in Berlin are organising the Data Science Summer School - a series of theoretical and practical workshops on the methods and technologies used in industry, government, and civil society to address the world's most complex problems. The Summer School will take place virtually in the latter half of July and with the participation of instructors from renowned institutions across Europe and the United States.