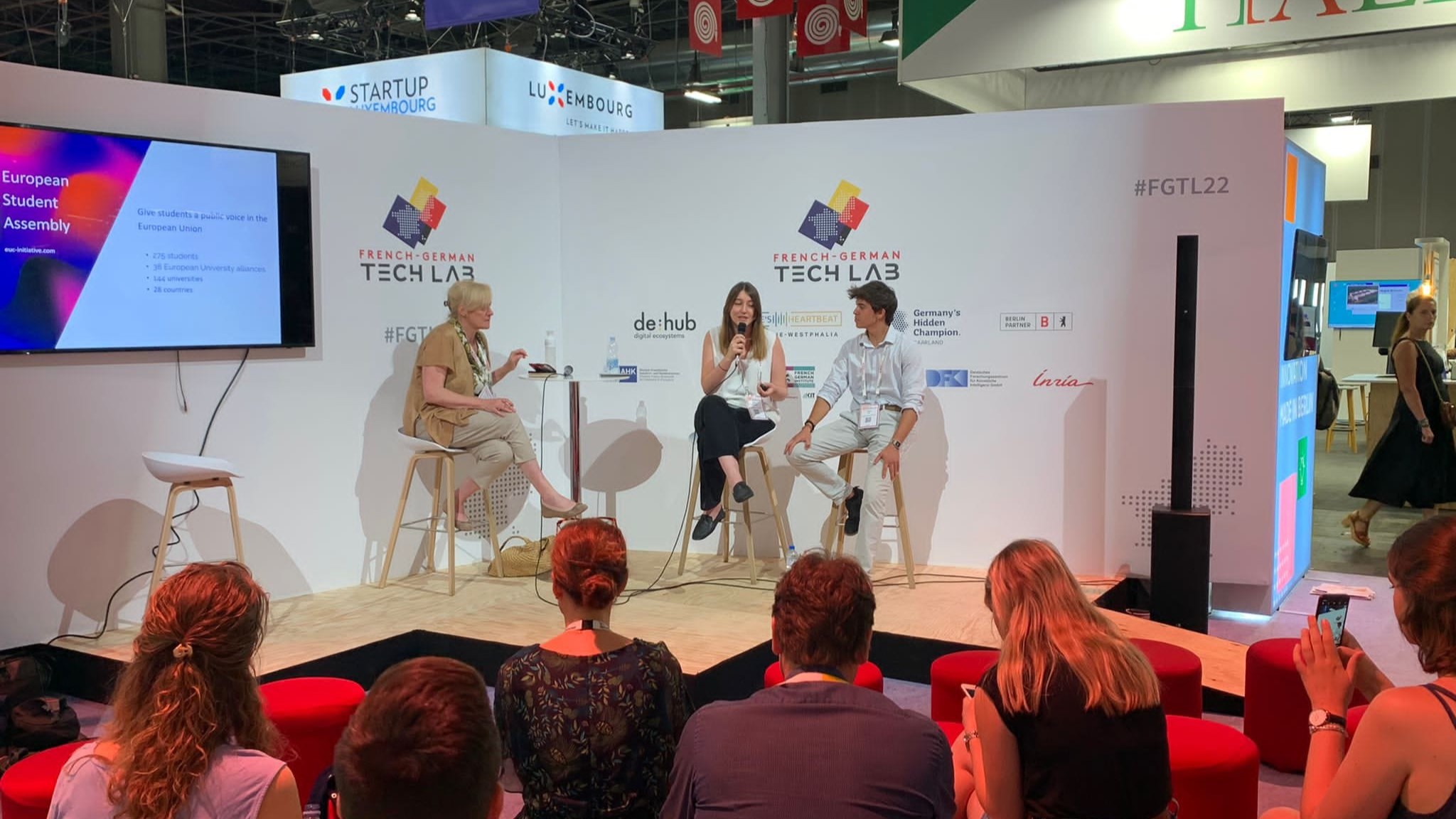 Students of the European Student Assembly disseminate their recommendations on cybersecurity at industry event.

Giulia Geneletti (Sciences Po) and Daniel Eid (Bocconi) took part in the European Student Assembly (ESA) that gathered 275 students from 38 European university alliances in Strasbourg last March. The French-German University and the French-German TechLab, invited them to present their recommendations at the 6th edition of the VivaTech Conference in Paris.

Tell us more about your participation in the VivaTech Festival

Giulia Geneletti: It was an enormous privilege and responsibility for us to be invited to this event by the French-German University, one of the ESA’s main partners. As the biggest startup and tech event in Europe, VivaTech2022 was the right place to talk about social innovation. Given the huge societal impact of new technologies, ESA and VivaTech share similar preoccupations and purposes.

Daniel Eid: The speech we gave on 18 June was a great opportunity to share our experience in Strasbourg and the months before. The main European conference about technological innovation was the perfect place to disseminate our recommendations regarding cybersecurity. Giulia focused on the ESA and the dissemination phase, while I explained our policy proposals on cybersecurity, which range from public-private cooperation to fighting female underrepresentation. The partnership with the French-German TechLab was a great success.

What role did you play in the European Student Assembly?

Giulia: At Sciences Po, I pursue a master’s degree in European Affairs with a policy stream on digital, new technologies and public policy. My participation in the ESA as a student coordinator of panel 2 on cybersecurity was therefore particularly relevant. I produced guiding documents and managed the negotiation and drafting work of the 20 students that were part of the panel. I was also part of the ESA organisation team, and my former experience as a coordinator in volunteering and education organisations was really helpful.

Daniel: Being passionate about innovation and technology, and in a context of rising Russian and Chinese cyberattacks, I immediately felt that the panel on cybersecurity was a good fit. The preparation phase, which consisted in reading papers and meetings with experts, helped me overcome the apprehension I shared with my fellow students to deal with such technical issues. We discovered our common interests, became familiar with the field and managed to formulate recommendations.

What pushed you to join this initiative and what have you learned from it?

Giulia: The ESA was an empowering opportunity - both personally and professionally - to learn and do more than just attending classes. It is fundamental for young people not only to understand the dynamics and complexities behind European decision-making, but also to actively participate and channel their voice in the most effective way. Having 275 students agreeing on a single document was a great democratic exercise, and behind every good policy there is a lot of studying, teamwork and compromise.

Daniel: The third objective of the European strategy for Universities is to ”empower universities as key actors of change in the twin green and digital transition”, but what rôle can students play in this change if their voice is not heard at the institutional level? A grassroot initiative like the ESA is a game-changer. Being the CIVICA Ambassador at Bocconi University I discovered it during one of the board meetings, and spread the word among fellow students. I applied because I wanted to contribute to the public debate at the European level.

ESA allowed us experience cooperation and diversity in policy-making. As we were coming from 28 different countries and multiple backgrounds, the addition of our different perspectives brought an undeniable added-value to our proposal. Our eyes are now pointing to the European institutions, hoping these recommendations will lead to a political response and have an impact on our future.

What are the links between cybersecurity and European democracy?

Giulia: Since the pandemic, EU citizens have increased their online presence and exploited, like never before, the benefits from digital tools; young people and students are no exception. Fostering awareness on data security and safety online has become fundamental, as it is to deploy specific educational paths - starting from Universities -, while preventing the risks of cybersecurity breaches by increasing the resilience of infrastructures. We defend a human-centric approach to new technologies, which should not be defined by experts, but shaped according to societal needs in a participative way.

Daniel: We observe an increased rate of cybersecurity attacks, the most prominent example being interference during elections. Fair elections are at the core of democracy, and attacks on them are aimed at undermining the confidence in democratic institutions. These types of attacks reveal the modern dangers and vulnerabilities of our democratic systems. It is therefore crucial to prevent cyberthreats and increase cyber awareness.

What are the upcoming steps for the European Student Assembly?

Giulia: Our participation in the VivaTech Festival was part of the dissemination effort we are undertaking since the Assembly. The whole idea is to reach out to people, events, contexts where key opinions and decision makers can hear us. Our team had the opportunity to meet with two representatives from the European Commission: Mattia de’ Grassi, Member of Cabinet of Vice-President Šuica, and Tine Delva, Deputy Head for Higher Education at the DG EAC. We have also been invited to present our recommendations during a public event at the European Parliament on 26 July. We will continue in this direction and in the meantime we are enthusiastically preparing the second edition of ESA in 2023. 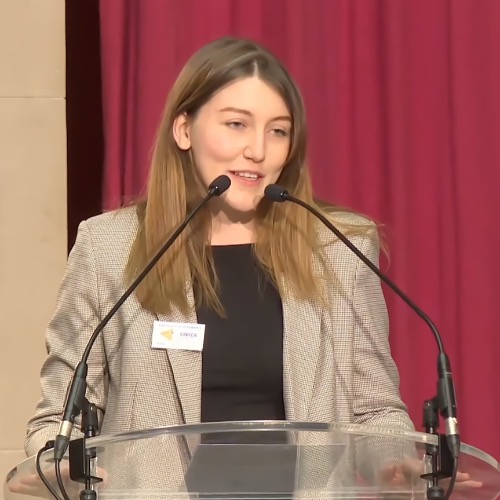 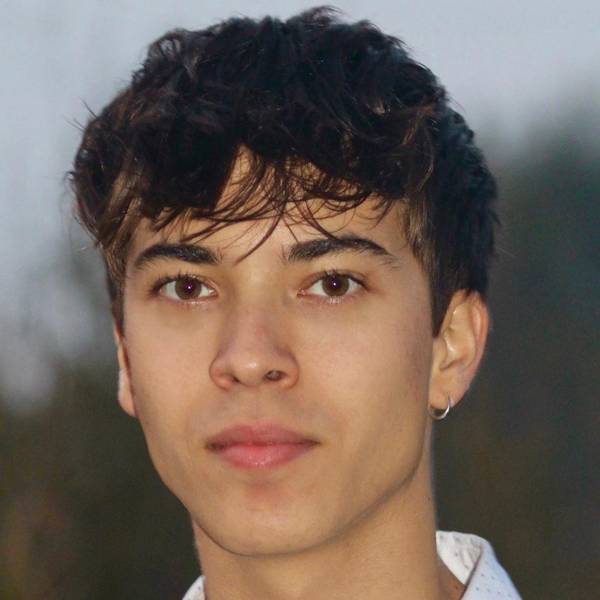