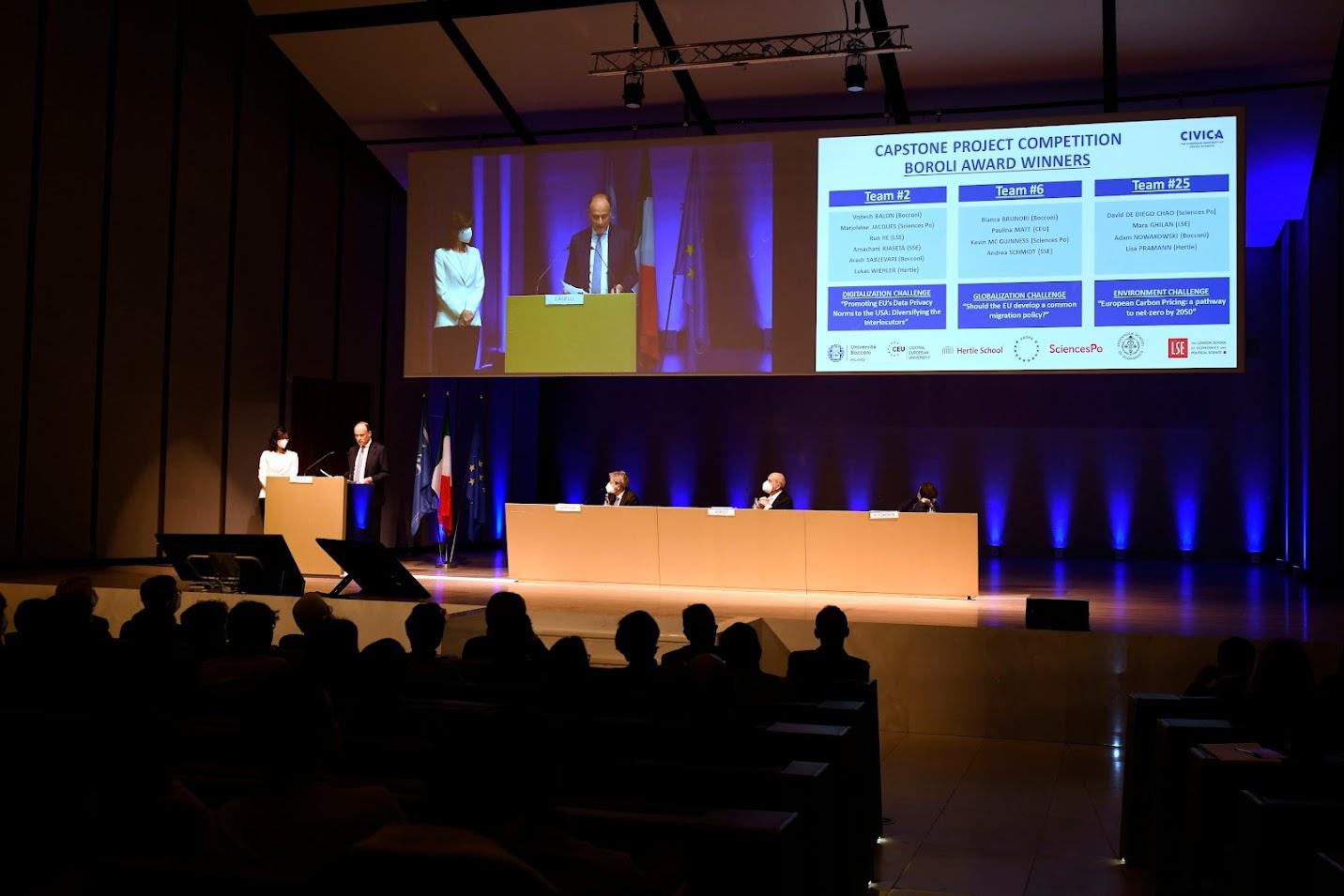 Data privacy, migration policy and carbon pricing – these were the tough challenges for the EU taken on by the best capstone projects of the first edition of CIVICA’s Europeanship multicampus course “The Future of Europe."

The course is one of the flagship initiatives of CIVICA, the alliance of eight leading European higher education institutions in the social sciences. Designed and taught jointly by a team of professors from the different alliance members, the course was delivered simultaneously across CIVICA campuses in the Fall 2021 semester, with live online lectures integrated with local activities. More than 130 master’s students examined EU policy-making in critical areas such as globalisation, climate change and digital transformation.

The final evaluation of the course was based on a group capstone project developed by teams of four to six students from at least three campuses. Each project had to address in detail a concrete policy challenge that the EU faces.

“The discussion and exchange between students from different schools and nationalities produced policy proposals of a very high value – potentially interesting even for the actual policymakers,” says Carlo Altomonte, Professor of Economics of European Integration at Bocconi University and coordinator of the course. “The added value of this exercise was that it replicates real decision-making at the European level, where there is a mediation between different cultures, nationalities and approaches. And this multicultural exchange and discussion are the true added value of the whole CIVICA multicampus course experience.”

On 8 February, the three best capstone projects were awarded a cash prize in cooperation with the Achille and Giulia Boroli Chair in European Studies at Bocconi University. The ceremony was held during a Bocconi-Boroli Lecture with guest speaker Paolo Gentiloni, European Commissioner for the Economy.

“We dedicated our attention to analysing the best channels through which the EU can promote the General Data Protection Regulation (GDPR) to the US, which does not have comprehensive laws in regulating data privacy,” says Arash Sabzevari, student in the MSc in Politics and Policy Analysis at Bocconi University and member of one of the winning teams. “This multicampus experience gave me a more detailed perspective on the fundamental challenges that the future has for us. Despite the distance, I also had the opportunity to work in a multinational group, which enabled me to build strong relationships across Europe.”

“In our project we analysed the EU’s ambition to achieve climate neutrality by 2050 and worked on concrete proposals to reduce uncertainty and improve the social dimension of carbon pricing,” says Lisa Pramann, student in the Hertie School’s Master of Public Policy, also in one of the winning teams. “The multicampus course was a great opportunity to learn from the expertise of lecturers from various excellent institutions and to connect with fellow students from across Europe. Coming from different backgrounds and contributing different skills, the exchange and debates in our group were really enriching”.

“We tackled the migration crisis in the EU – going for a smaller approach, trying to figure out what was stopping migrants from progressing and integrating. I studied integration and felt one area that could use improvement was language training. I suggested that the EU creates a language training program for migrants,” recounts Kevin McGuinness, a Master’s in International Security student at Sciences Po. “I liked working with teammates with different academic backgrounds and learning how other universities work, how they tackle problems. This type of cooperation between students is a fantastic way to learn more about the rich academic culture of the EU.” 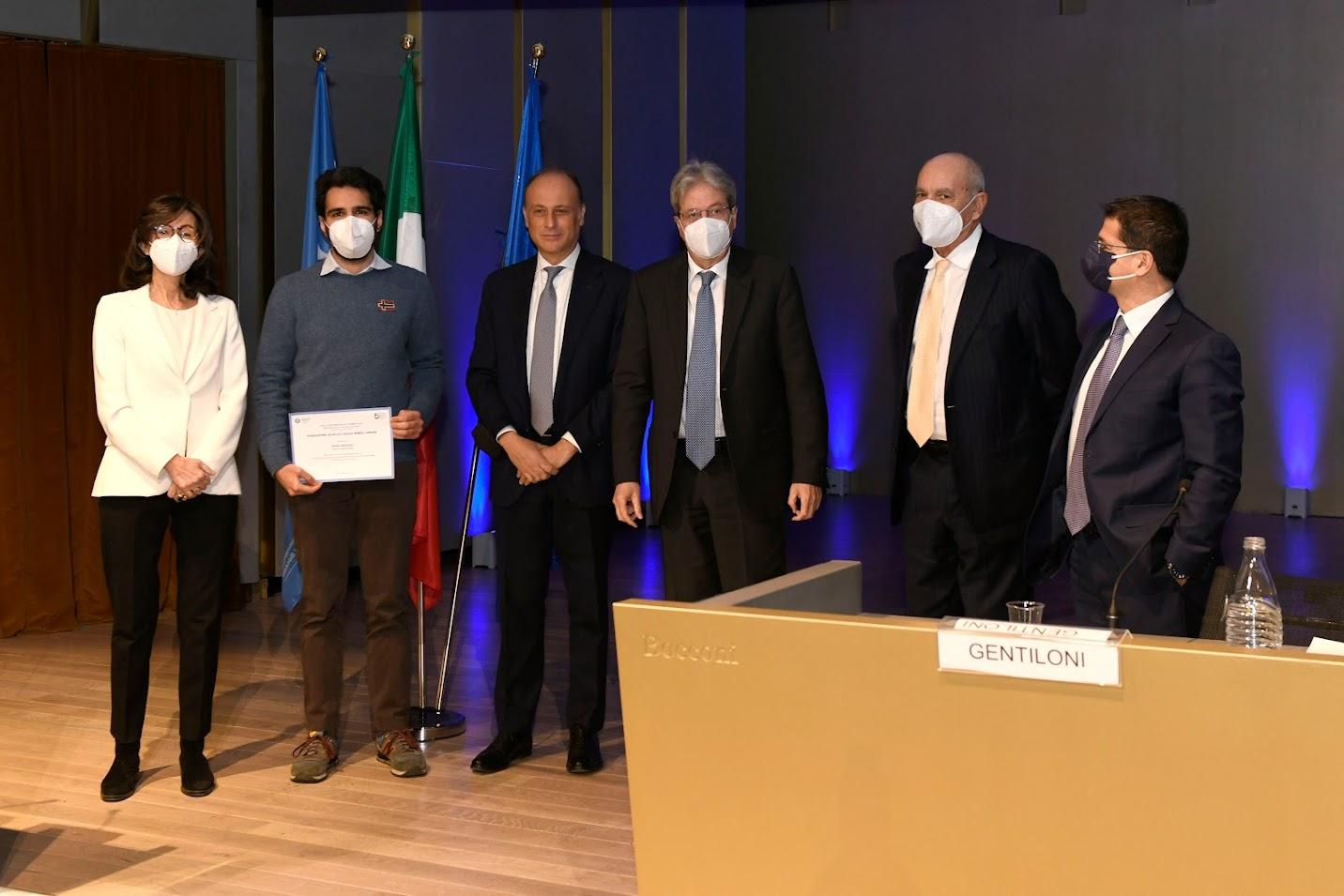 One of the three winning teams receives their award in presence. (Photo courtesy: Bocconi University) 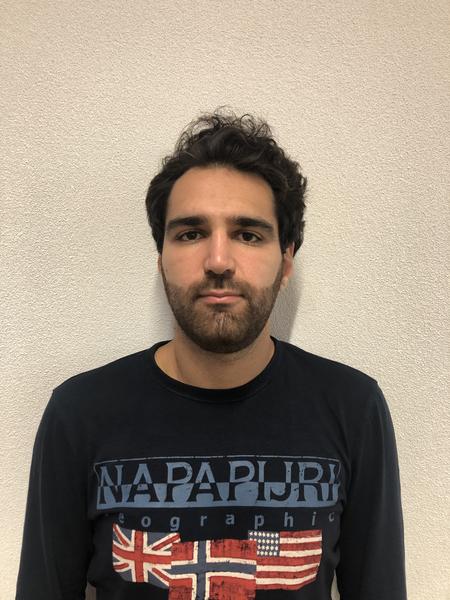 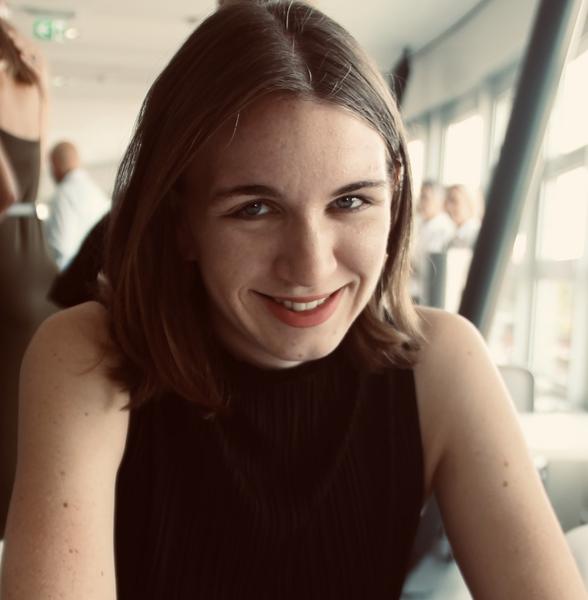 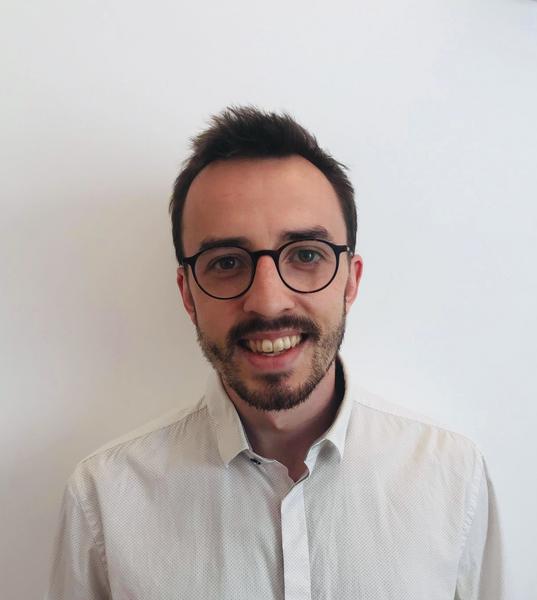