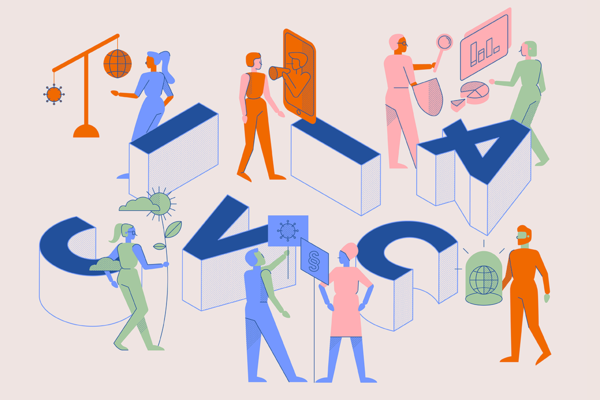 On 15 February, Central European University (CEU) hosted the first event in a new CIVICA series committed to communicating social science research and knowledge from the eight partner universities into the public realm.

The CIVICA Public Lecture Series convenes experts from CIVICA universities to present their research on topics currently in the news. The aim is to facilitate a direct dialogue between social science researchers and broader society and, in doing so, strengthen the public knowledge base.

“The CIVICA Public Lecture Series Tours d’Europe is an indication of our commitment to engaging with the public,” said CEU Dean of Students Chrysovalantis Margaritidis during his opening remarks. Margaritidis, leading CIVICA’s civic engagement efforts, added “At CIVICA we embody the European idea in its purest form: united in diversity and what it is to build the European University of the future, to provide learning and teaching, to offer mobility among our universities, promote an interdisciplinary approach and bridge education across Europe… A very important aspect of our endeavour is reaching out to people outside the university.”

Civic engagement is a key value integral in the activities and identities of each CIVICA member institution. To that end, the goals of CIVICA’s project on engagement, led by CEU, are to: first, ensure that partner universities coordinate their civic engagement activities in a way that enriches them and allows for the exchange of knowledge, and second, ensure that CIVICA becomes an active agent in society. This will allow for an effective interaction between CIVICA and the citizens of Europe and beyond, ultimately leading to the promotion of European democratic values beyond academia and the realisation of the importance of civil society.

“The goal is to connect universities with each other as well as different societies and nations,” noted CEU Director of Community Engagement Flora Laszlo, co-organiser of the February 15 event. Laszlo explained that the vision for the CIVICA Public Lecture Series - to extend social science research to broader society - is similar to that of CEU’s Borderless Knowledge series. With CIVICA’s series, the reach moves beyond national borders. Additionally, as the series will be hosted by the different CIVICA member institutions, the nuances of each host location are expected to offer fresh contexts for each conversation.

CIVICA’s current research themes address ongoing societal challenges: Societies in Transition and Crises of Earth, Challenges to Democracy in the 21st Century, Europe Revisited, and Data Driven Technologies for the Social Sciences. “The agenda set by CIVICA’s research work package is very ambitious,” as CEU Global Partnerships Officer Monica Jitareanu, CIVICA manager at CEU noted. Underscoring the important link that CIVICA Public Lectures serve in disseminating research to the public, Jitareanu explained its aims at facilitating new solutions to the most pressing issues of our time, expressed by the four themes, and CIVICA’s intention to do so through the integration of advanced social sciences research with teaching and learning.

“Ultimately, our goal is to create a unique research environment to emphasise what is original about the European approach to social sciences,“ said Jitareanu. “Something like this cannot be achieved without reaching out to a wide audience. It’s not enough to have the best research program, we need to make it known. The CIVICA Public Lecture Series Tours d’Europe is our best shot at telling the world about it.”

Particularly against the backdrop of the COVID-19 crisis, leaders of CIVICA recognise the role that only the social sciences can play in understanding the current and future impacts of the pandemic. “The public can become aware of the research and knowledge available at our universities and how it affects them. Of course this is a two-way street,” said Margaritidis. “Our research should be informed by what is important to the public. Our lives have irrevocably changed since last year and universities are positioned to provide action and hope under these circumstances.”

Watch the first CIVICA Public Lecture Series Tours d’Europe, Democracy in the Time of Pandemic, below.

Democracy in the Time of Pandemic (CIVICA Public Lecture #1)