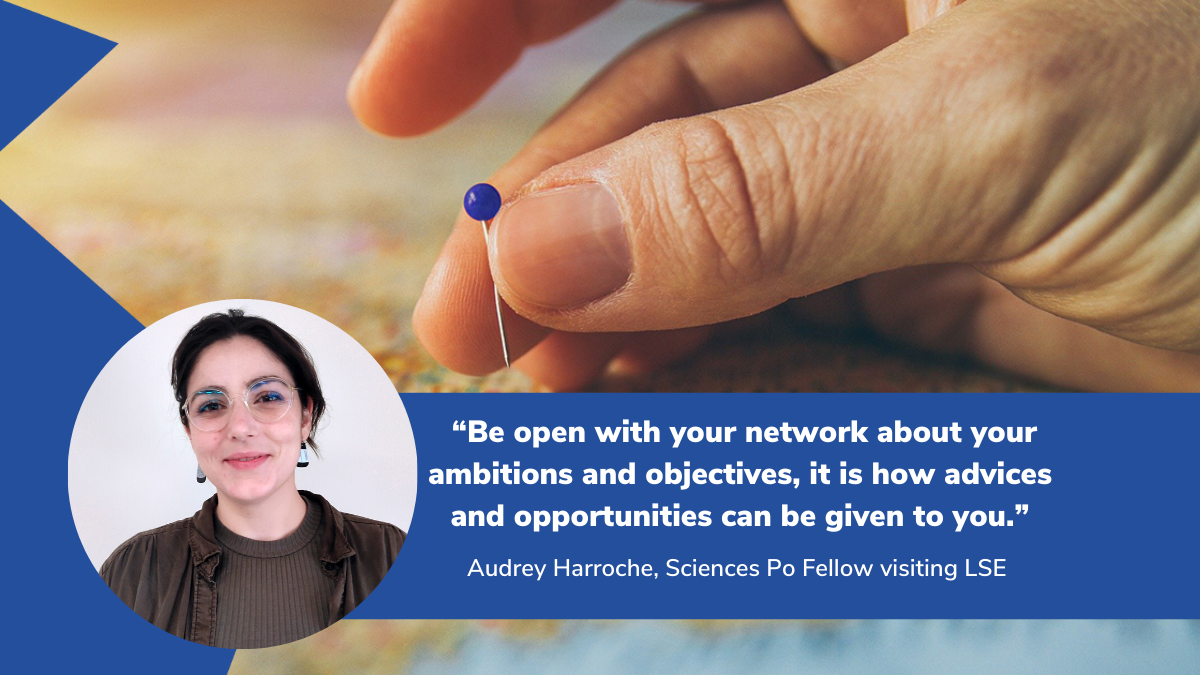 “I would advise being very open with your network about your ambitions and where you want to take your career, it is how advice and opportunities can be given to you.”

Through the CIVICA Postdoctoral Mobility Scheme, Audrey Harroche became a visiting fellow at LSE from her home institution Sciences Po.

Having spent the majority of her research and educational career in France, the CIVICA mobility scheme was an opportunity for Audrey to collaborate with researchers in her field, who worked in a different national context. This allowed her to take that next step in her research and explore main differences of excellence initiatives in higher education between different European countries.

She describes why the opportunity to visit another institution benefitted her research as well as furthered her career opportunities.

In 2021, you obtained your sociology thesis entitled: "Governing through inequalities: the implementation of an initiative of excellence in higher education and research." What results can you share with us?

My thesis focuses on the main policy carried out in the name of excellence in French higher education and research, i.e. the Excellence Initiatives (Idex). The aim is to create world-class universities by concentrating, through application calls, supplementary resources (7.7 billion euros) on fewer than ten universities. These funds also have to be distributed in a concentrated and competitive way within universities. To do this, universities’ leaders are required to differentiate and prioritise activities and individuals within higher education organisations that are already riddled with inequalities. In doing so, the Idex increase inequalities between institutions, but also within them.

Through the longitudinal study of one of the successful Idex projects, I showed under what conditions a policy aimed at deepening and creating inequalities can be carried out, and what effects it generates.

The first result of my thesis shows that the Idex rely on local dynamics. This policy needs relays to be implemented, especially within universities governance. It favors configurations like the one I studied where university leaders formed a professional elite and built a project for the university site over the last twenty years using the different instruments deployed by the State. In that sense, the Idex allow changes that seem sudden such as universities mergers, but which are actually from the result of the long-term action of local actors way before this policy.

The second result has to do with the mechanisms of inequalities’ production. I have shown that the production and reproduction of inequalities are played out at the organisational level. In order to concentrate resources and offer better working conditions to certain researchers within universities new indicators, rules, procedures, and ad hoc structures - such as university foundation and international committees - are put in place. In my PhD I showed that inequalities do not exclusively come from the functioning of organisations, but are based on specific organisational work that aims to both produce and legitimize them.

Finally, contrary to a lot of the work on instruments, my thesis shows that the significance of Idex lies less in the control of individual behaviours and more in the drawing of perimeters. The Idex draw lines within academic communities to increase the gaps between their members. By observing the delineation of perimeters among professional groups and organisational members, questions about governmentality can be posed in new terms. It is no longer a question of measuring the performativity of a public action instrument in terms of its greater or lesser capacity to govern individual behaviour, but of studying what the mechanisms of inclusion and exclusion induced by these perimeters produce. In particular I explored the gendered dimensions of these perimeters and showed that women tend to be more excluded than men from these funds leading to professional evolutions.

You have just finished a post-doctorate. What was your mission? And why did you choose LSE?

I was working under the direction of Christine Musselin (CNRS/Science Po) in the framework of the project 'Collegiality: an international comparison' directed by Kerstin Sahlin (Uppsala University) and Ulla Eriksson-Zetterquist (University of Gothenburg). On this project, I continued to study the Excellence Initiatives and use the monography from my PhD in order to produce a comparison between different universities labelled “excellent”. Because the Idex strengthen the decision-making power of the French universities’ leaders and ask them to set priorities in order to concentrate funds on those who are considered to be the best researchers, it challenges collegiality. We decided to question how this policy affects collegiality in three Idex universities through comparing their hiring practices. We explored how decisions are made regarding the new hiring devices that have been implemented in the name of excellence. In doing so we were able to analyse the evolutions of power relationships in these universities and what effects they produce on collegiality as a mode of governance and a mode of conduct. I was in charge of collecting and analysing the data for this study alongside Christine Musselin. We are currently working on a paper to be published in a special issue of the Research for Sociology of Organisations coordinated by Kerstin Sahlin and Ulla Eriksson-Zetterquist.

I chose LSE because I aim to further my postdoctoral research studying policies for excellence in higher education through cross-national comparisons. With this mobility scheme, I was able to lead the first interviews in order to design a comparison between the French excellence initiatives and the Reference Excellent Framework in the UK. I was also very eager to discuss this project idea as well as to share findings from my doctoral and post-doctoral research with the members of the Centre for Analysis of Risk and Regulation at the accounting department from LSE. I was especially interested in comparing my findings to the results produced in the framework of the project “Quantification, Administrative Capacity and Democracy” (QUAD) directed by Andrea Mennicken who sponsored my visit. This project analysed the rise of quantifications in public sectors in different European countries and its effect regarding administrative capacity and notions of citizenship, equity, accountability and legitimacy. Higher education and research was one of the fields that this study focused on. The development of evaluation procedures especially through the use of quantitative indicators is a big part of the Idex projects so it was very insightful to learn more about the QUAD’s outputs and to put them into the perspective of the policies for excellence.

For several years, you have been working on higher education. Your feedback interests us. What have you discovered about how the UK academic market works? What would you say to an early career researcher who want to take its career in the UK?

This experience has been a great opportunity to become socialized in the British academic system. I was able to engage in discussions with both senior researchers as well as early career academics. I had access to different insights, to see various trajectories and to discuss multiple kinds of experiences. I was given great advice regarding the job market, and I would say that a good way to get a foot in the British academic system as an early career academic is to do some kind of visiting. It is one of the best ways to get in touch with local academics who work on the same themes or tackle similar questions. It is also a very good way to have a sense of the kind of positions that are available in one's field, which kind of job offers are around, and what can be expected from an early career academic. The kind of post-doctoral mobility scheme that CIVICA offers is ideal for this. This stage is quite crucial if one wants to make a significant move in the UK since the academic job markets vary so much depending on the country. For instance, France does not follow the tenure track system, so some of the practices that I learned regarding job applications are not so suited for the British context. I learned that, for example, in the very early stage of one’s career it seems to be not so useful to apply for lecturer positions in the UK, while in France it is very much encouraged. So, while you are building your CV and your publications in English, I would advise you to keep an eye out for teaching fellow job offers as well as post-doctoral research fellowships. Most importantly I would advise being very open with your network about your ambitions and where you want to take your career, it is how advice and opportunities can be given to you.

CIVICA Research brings together researchers from eight leading European universities in the social sciences to contribute knowledge and solutions to the world's most pressing challenges. The project aims to strengthen the research & innovation pillar of the European University alliance CIVICA. CIVICA Research is co-funded by the EU's Horizon 2020 research and innovation programme. Subscribe to the newsletter to stay updated with CIVICA Research developments and opportunities.